Skip to content
Thankful For…: Take 50% off installation labor on LeafGuard® Gutters & GAF Asphalt Shingles
Thankful For…: Take Up to $1000 off an HSI Dream Deck*
A Message Regarding Coronavirus (COVID-19)
Storm Alert: If your home in Iowa has suffered hail, wind, or any type of storm damage, it’s vital to have a professional you can trust. Turn to HSI.
Start Your Skilled Trades Career HERE. We’re Hiring!
New Roof Winner Announced

After several months of nominations, a new roof winner has been selected for our central Iowa “No Roof Left Behind” project. Tricia Croushore of Adel will be receiving a brand-new roof for her home this fall! In March, Tricia discovered she had breast cancer and began chemotherapy. She recently had a partial mastectomy with reconstruction, and will soon begin radiation. Over the past year, she has managed to push through the hard days and only miss one day of work. As a nurse and a single mother, she is used to always putting others’ needs ahead of her own.

She has been so strong during this battle with cancer and has always pushed through to stay strong for the ones who rely on her the most. Once she begins her radiation, Tricia will have to take time off to recover and gain strength. While staying home, she won’t be earning her regular income which will put more stress on an already tough time.

Tricia has lived in her home in Adel for around ten years. It is an older home, and the roof itself is very worn. The garage leaks water when it rains and at this moment in time, she just doesn’t have the additional funds to repair or replace the roof.

She has been a part of a single moms group since 2012 and two of the women nominated her for the No Roof Left Behind campaign in hopes that she would win, and this good news would bring her some joy during this rough patch in life. 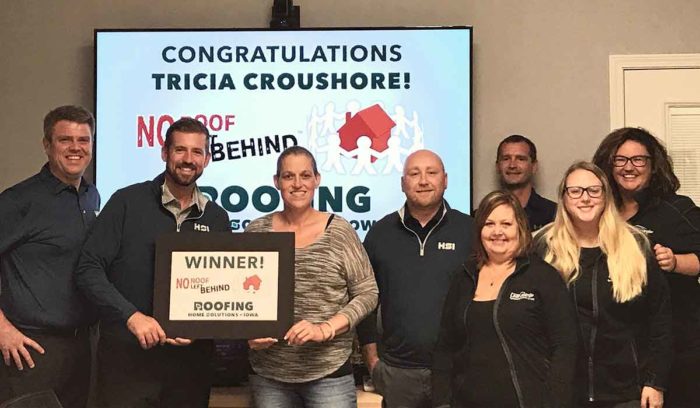 Celebration To Come For Roof Winner

This will be a family-friendly, festival-style neighborhood event and all are welcome. Fareway Stores, Inc. has also joined as a sponsor of the celebration and will be providing food and beverages for all attendees. Media will be invited as well.

Stay tuned for the date for the Installation Celebration – we hope we’ll see you there!

What to Know When Comparing Types of Roofing Shingles

What Does The Good Housekeeping Seal Mean?